First, my bird with his autograph from Moa: 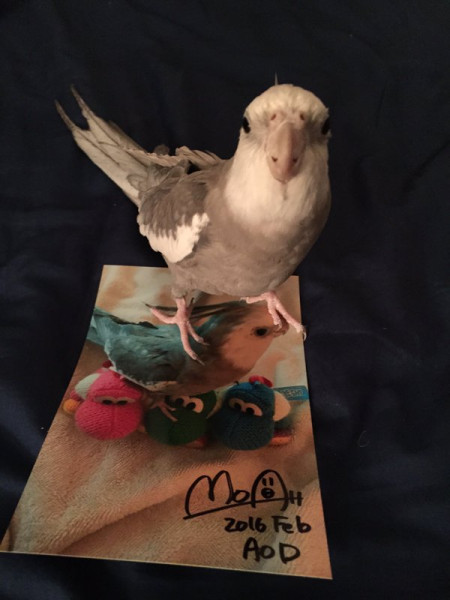 - On Hatoful Boyfriend’s worldwide popularity: Moa feared no one would show up at the panel, oh no! Rest assured, nearly every seat was filled up.

- On which birds they’d like to see crossdress next: Nageki (in a sailor fuku) and Nanaki (in a school-assigned girl’s swimsuit) (I can’t remember who answered which)

- “What was the saddest part of Hatoful Boyfriend for you?”
“Iwamine Shuu is alive.”
“Azami and Rabu breaking up.”

(Again, can’t remember who answered which)

- Moa does not play many visual novels, but she loves the Gyakuten Saiban/Ace Attorney games. (There were many excited “Knew it!” murmurs from the audience)

- The hardest part of translating Undertale from English to Japanese for Moa is Sans’s dialogue.

- On why Ryuuji likes humans: "Ryuuji loves all living things!" - Moa (This elicited many “awwww”s from the audience)

- On why Ryouta likes humans: "He doesn't like humans in general, he just likes Hiyoko." - Moa (This elicited many more “awwww”s)

- The demo took a day to finish, the BBL route took 2-3 months to finish, and I can't remember how long the full game took to finish.

- The reason Okosan doesn’t have a human portrait is because the real-life Okosan is family to Moa, and attaching her own “human” image to him would feel strange.

- Miru and Kaku were characters that existed years before Hatoful was created, drawn in various drafts.

- When asked which character she’d most like to be friends with, Moa answered the King.

- Moa went with birds as a dating option because birds are so commonplace and, of course, because she loves birds.

- When making Holiday Star, Moa wanted to give the quail characters more focus.

- When asked about where Miru and Kaku would be if they existed in the BBL route, Moa said they’d just be off stealing Christmas trees.

- Moa said she'd probably die on her first playthrough of the game.

- She had a really cute story about the real-life Okosan when he first hatched from his egg, but I can't remember it! In addition to Okosan, Okosan's parents are the other birds she owns.

- I know she was asked how she thinks Okosan is doing back in Japan while she’s here in the USA, and I think she answered that she misses him, but knows he’ll do fine.

- When asked why all the characters have sad routes, Moa answered it was because she has a dark side.

- When asked if there were any more romantic interactions between the characters that didn’t make it into the final game and what they were, Moa answered: “Secret!”

- On whether she had an image of Hiyoko in mind: she preferred not to answer, wanting the audience to draw entirely from their imagination.

- Moa knows of Aviary Attorney and it's on her wishlist on Steam :D

- Regarding dakimakuras: Moa said it would be a possibility if another company like the Esc-Toy offered.

- Moa’s favorite bird in America is Brewer’s blackbird, which she would like to possibly include in a future game.
Tags: aod, conventions, hatoful boyfriend
Subscribe